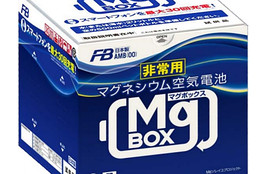 A couple of Japanese companies have invented a battery in a paper container that can recharge mobile devices when power is out during a disaster.

Following the 2011 tsunami in Japan, several large swaths of the nation suffered outages for weeks.  Furukawa Battery designed the battery that fits in a leak proof container designed by Toppan Printing Company. When water is added, fresh or salt, electrons flow between the electrons, generating electricity, the two companies’ joint news release said.

“After the disaster we thought ‘What can we do, as a battery company?’ and came up with this idea,” a spokesman said. The companies hope the battery will help facilitate more  information to get out to those in disaster situations. When phones are out, it is hard to communicate and warn others in crisis situations like natural disasters.

Similar to normal batteries, the one in the waterproof box in this design has two electrodes: one is made up of magnesium; and air serves as the positive electrode.  The battery can reportedly recharge a smart phone up to thirty times and can works for up to five days.

The batteries will go on the market in December .  So far, no word on how much they will cost.

Would you buy one?