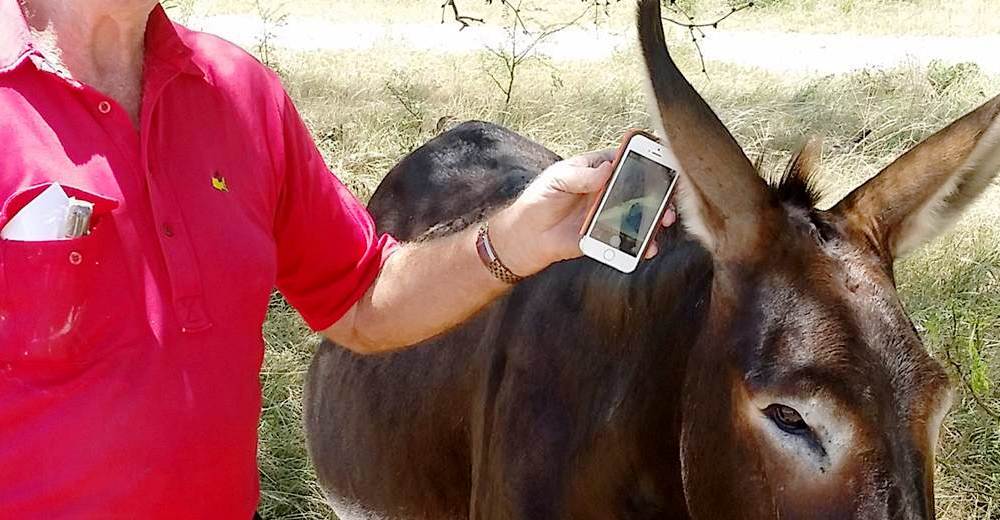 What does a donkey, a plane and an iPhone have in common? The parallels are almost unbelievable.

Ben Wilson, owner of natural-gas equipment company Gas Corporation of America, had just taken off in his Beechcraft Bonanza single-engine plane from his Houston home in Wichita Falls, Texas when his door suddenly opened about three inches mid flight.

His iPhone fell out while he was about 9,300 feet in the air, landing in the field below, unbeknownst to Wilson.

After he eventually landed, that’s when he noticed the phone was missing. He assumed it was gone for good but used the “Find my iPhone” app  to track the phone to a pasture 90 miles away.

Because he was determined to get the 1,000 photos and over 250 contacts in that phone, he hopped in his car and drove from Wichita Falls to Joplin, Texas, to the field

The phone was finally tracked to a fenced-in field.

“I climbed the fence and this donkey trotted up to me and looked me right in the eyes,” Wilson said. “He would not leave our sides. I think he was trying to help us find the phone.”

Much to Wilson’s surprise, the phone was clearly visible in the pasture, snuggled in a thick patch of grass below a mesquite tree which probably cushioned the fall.

“I said , ‘You pick that phone up before that donkey steps on it!'”  said Wilson’s step son John Kidwell who accompanied him on the trip after using his version of the Find My Phone app to help locate the phone. “Can you imagine if it survived a 9,300-foot drop just to get stepped on by some donkey?”

Besides a few scratches on the corner, the phone worked fine, the screen was still in tact and all other features worked well. The phone even outlived the external battery back that fell off of the protective case during the travels to the ground.

Wilson was able to verify the elevation at the time of the drop using an app called FlightAware, and is just happy to have his phone and contacts back…oh and a new friend in the donkey.

“I didn’t get to talk to the ranch owner, but I want to send him a newspaper clip and tell him I’d want to adopt the donkey. He was a hoot,” Wilson said. “We made a new friend and I got my phone back. Everything turned out real well.”

This entire story is a GREAT PR story for the iPhone, the protective case and that flight app.

The lesson here is: make sure your door is securely shut when you take off in your plane.