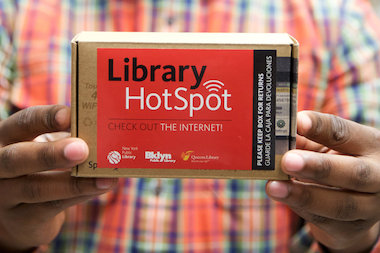 This week, it has been widely reported that Google donated $1 million dollars to the New York City Libraries to fund a free mobile hot spot rental service. It’s part of Google’s efforts to contribute to wide broadband deployment to rural and underserved areas.

Approximately, 10,000 portable Sprint WiFi hotspots will be made available for rent  at Queens Library, the New York Public Library and the Brooklyn Public Library.

However, what the initiative would do also is help bridge the broadband adoption gap.

At the “Leveraging International Models to Enhance Broadband Adoption in the U.S.” session TechYaYa senior writer Jeneba Jalloh Ghatt moderated yesterday at the annual RainbowPUSH telecommunications symposium in Washington, DC, panelists discussed how “relevancy” is one of the barriers to broad in-home adoption. Those who have not yet subscribed to broadband may be unsure if it is relevant to their lives.

Indeed, a 2013 PEW Research survey found, “while much of the attention on broadband adoption has focused on price and access,” the new “top reason that 34% of non-Internet users in the United States do not currently use the Internet is that they simply don’t find the Internet useful, relevant or necessary for their daily lives.”

Sure the costs when over $75 per month, for example, plays a big role in low -income people opting out. However, research also shows that 86% of households subscribe to mutli-channel television services, like cable, including moderate income homes.  People pay for what they value.  Therefore, if more were able to realize that in-home broadband is relevant and can be useful to their lives, and the lives of children and other family members in their household, more would adopt it as well.

With the hot  spots, families get a chance to test out in-home broadband access and after that may recognize that it’s something they want on a permanent level, Danielle Kehl, policy analyst for Open Technology Institute at the New America Foundation explained.

From the trial run, families can then learn more from the library how to access low cost and subsidized access available through local, state and nationwide programs.